Well, it's been 4 weeks since we saw our allergy specialist with our 3 month old baby boy. The good news was that he didn't react to any of the skin prick tests. However, the bad news is that apparently babies who don't react at 3 months can still show very serious results later on. So a retest is recommended at 6 months. So far so good... afterall, our first son was only tested at 9 months.

Then... Yes, our son does have allergies based on the rashes all over his body. Steroid creams perscribed.
Then... Mum, you need to eliminate milk, egg, wheat, soy, oats, seafood, peanuts and all tree nuts. Also, no more tomatoes, mushrooms, onions or citrus. What the?!?!?!

That's right folks, not even soy sauce is allowed since the manufacturing process somehow intensifies the soy content that is passed through breast milk. At first I had a brainstorming session with a friend on facebook, trying to figure out what takeaway foods I could still eat... we came up with a few, albeit bland... but then, as we've progressed in this crazy elimiation diet, and I have indulged in the occasional chicken and chips, or store-bought sushi... I've realised that actually, I can no longer eat out, except for eating plain rice and MacDonald's fries. That's right folks... no more KFC, no more icecream, no more chocolate, no more easy takeaway dinners... ever!

Ignorant bliss - that was certainly the world I was living in but a month ago. So what do I eat?? Well, for the first 2 weeks, I was basically hungry. Our son is exclusively breastfed, weighs nearly 8kg (he is a whopper) and so drinks over 1 litre of milk a day. Anything I ate didn't seem enough, and my day time naps were gone, since I wouldn't be able to sleep because of the hunger. At night, I was waking not just to feed bubs, but waking at other times due to hunger. Soooooo frustrating, I cannot begin to tell you!

The purpose of this diet is to identify exactly what causes the allergic reaction in our son. Once his skin is completely clear, I can try adding one serve of a new food a day, for 3 days in a row, and watch for a reaction. If there is a reaction, then I have to go off that food again. So far, we know soy products cause a rash. I'm currently testing dairy, but expecting a bad result. The main reason I even bother to test it is so that we can legitimately get a perscription for hypoallergenic formula. Along the way, I accidentally ate cous cous (wheat) and that caused a reaction. While trying to find alternative foods to eat, I've also tried lentils and mung bean noodles - both of which I think have caused reactions.

At the moment, so many of the things we've tried have led to a bad reaction. One positive is that Roast Lamb with Roast Veg is still on the weekly menu. I've eaten so many tins of tinned corn, chickpeas and butter beans, I think I should buy shares in the company. On one day, I can open 4 tins! Oh, for flavour, I open another tin of corned beef... (looks more and more like cat food the more I look at it). 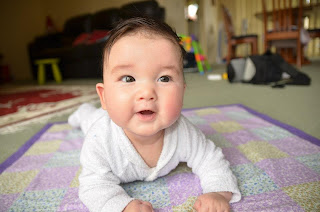 Well, our son does have gloriously beautiful skin actually - once all the rashes went away. He gives the most gorgeous of smiles and laughs - this is the only thing that keeps me going on this wretched diet. So many times I think about stopping breastfeeding and giving up. But then I also know that testing foods through breastmilk is probably the safest way of testing. He's unlikely to die... that's got to be a good thing! As we approach the age of eating solids, it is a comfort to me that he probably won't react to rice cereal, given how much rice I have in my diet. I'm pretty confident about potato, pumpkin, carrot and sweet potato when the time comes, so that is already a good start.

We have another appointment with our allergy specialist in two weeks as a follow up. I have no idea what to expect from this next appointment... surely it can't be worse than this.
Posted by Allergy Fun at 3:38 PM