Exhausting... that's a word for it! A week on from the main event and we're still recovering!

Yup, lots and lots of work, but once a year, we can probably do it. When we eventually have more kids? I think we'll have to rethink the whole caper!

One thing that has definitely struck me though - when we go to other people's homes for parties, my husband and I are on constant watch. For instance, the last party we went to, there was a child wandering around holding a cracker with cream cheese on it. She was licking the cheese off every so slowly, wandering in and out of the house. I was watching her, watching our son, and watching everything she touched. I didn't know the family, so didn't feel comfortable saying anything. Anyway, for our son's party, there were dangerous foods about, but all the adults know about his allergies and it felt like everyone was on the look out for him. There was still vigilance on our part, but the party was significantly more enjoyable.

Enough about me... let's hear more about the party!

Here it is... the motorbike cake. Topped with a little Lego man - our poor son saw his new toy sitting on top of the birthday cake and you had to physcially restrain him from grabbing it right off! The best bit: He sang the Happy Birthday song to himself, complete with Hip Hip Hooray... gorgeous! 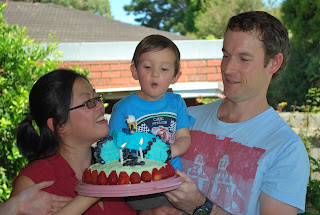 This is what the traffic light jellies started off looking like: 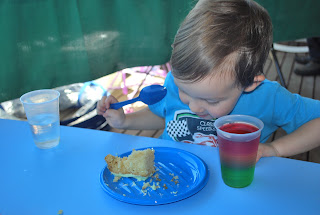 And then at some point our son decided that he really wanted the green jelly... 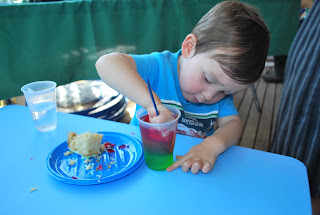 Success? Well, we got to celebrate our son turning two with lots of family and friends. By the end of the day, he did have a rash on his face from a platter of fruit I had left out - thinking back, why oh why did I have to put rockmelon on a platter of fruit when I could have just used fruits he was ok with? Who knows. But in the end, we washed off the rockmelon and our son made it through the day.

Everyday he wakes up now asking "Birthday Party?" and "more presents?" ... afterall, if you could, wouldn't you?
Posted by Allergy Fun at 10:34 PM