When we first enrolled our son into proper childcare, I decided to put together a list of foods that he could eat, to provide the cook a firm foundation to work with. I included specific product brands and also broke the list up into different sections to allow for easy substitutions to be made.

Whenever I do an update, I am slightly pleased that there is pretty much no more room left on an A4 sheet! What a long way we have come from the early days.

However, I have to admit, I still do get a little down every now and then. After a couple of scares at childcare concerning another child with allergies, the center seems to have put a lot of extra effort in training new staff and just thinking beyond the most obvious allergens. The center gets a special activity in about once a month - which is quite a treat for the kids. One month, they got an animal farm in - something our son would have loved. It wasn't rostered on one of his days, so we missed out on that one. However, about a month after the event, the center director pulled me aside. She explained that she had initially planned it for a day when our son wasn't around, just in case, but once the animals arrived, she realised that there was animal food strewn over the grassed area. It wasn't possible to collect all the remnants and so our son's group had not used this outdoor area for about a month, just in case. I was pleased about the thought she had put into it. I suggested that the normal weather conditions would probably have broken down allergens after a month, and that we would just have to risk it. Then, a week later, she gave me a list of all the ingredients, after she'd contacted the animal company. How nice is that? As it turns out, oats was on the list, and that is one of our son's allergens. So, I think it was wise to leave the garden fallow, so to speak. It's been 2 months of Melbourne weather... all I can do is hope that really is long enough. My guess is that the animal farm probably won't be back for a while, unless they do it in the carpark next time... or perhaps I can report that our son is no longer allergic to oats. There's always hope.

So here's a copy of our son's Safe Foods List - I try to regularly update Childcare with any new foods and also keep a copy on the back of my pantry door for my husband to look at, if he's in doubt. I hope you find it helpful too. 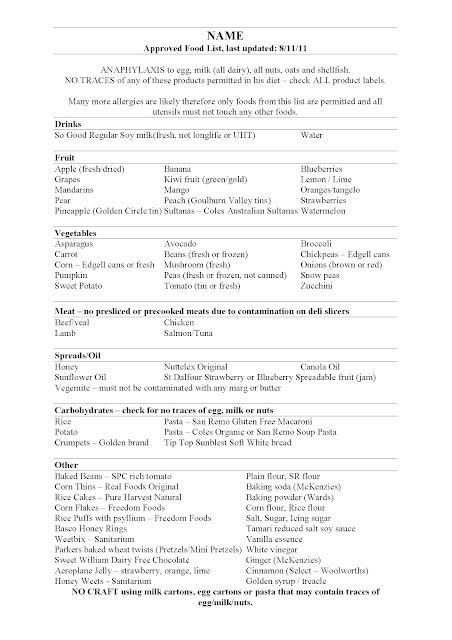